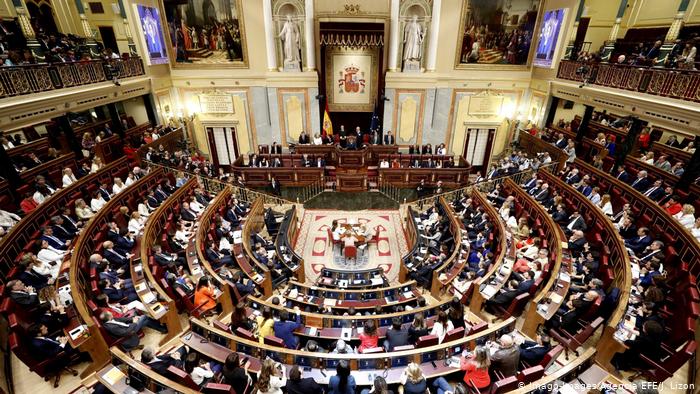 On 28 April Spain’s PSOE (socialist party) won 29% of the vote in the country’s general election. It dominates the new parliament with 123 seats, still short of the golden 176 needed for a majority.  The conservative Partido Popular (PP) lost over 3 million votes by comparison with the 2016 election, dropping from 137 to 66 seats – a further blow to its prestige following its removal from power last year in the wake of a corruption scandal. 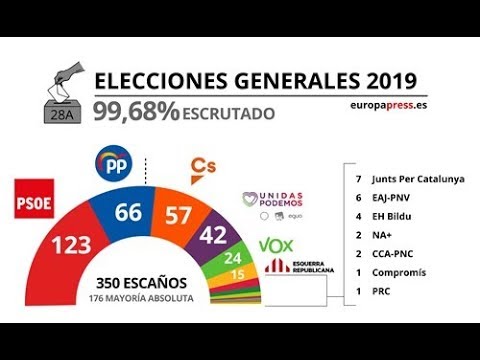 The result was a triumph for PSOE leader Pedro Sánchez. Since becoming Prime Minister in June 2018, he had resisted calling a snap election until his inability to get a budget through parliament made it inevitable. By using his first months in office to increase the minimum wage and work towards gender equality he shrewdly gained support and infuriated the right.

Despite his success he faces a difficult decision. Even with Unidas Podemos, the socialists’ potential left-wing allies who won 42 seats, Sánchez is unable to secure a majority. An alliance with the center-right Ciudadanos (Cs) would secure him a majority, yet even before the election process began Cs’ leader Albert Rivera ruled out an alliance with the Socialists because of Sánchez’s willingness to enter into dialogue with the pro-independence Catalan government.  A coalition with Unidas Podemos and all the other regional parties would also leave the PSOE just short of a majority. As an alternative, Sánchez could choose to govern as a minority party, or call fresh elections if his potential allies don’t cooperate.

For Podemos, the party which helped Sánchez’s policies through parliament in the last

year, this election brought disappointment. In 2016 Pablo Iglesias was an exciting face for the radical left, but 3 years later the party’s vote share has halved to just 17% as the radical right swooped in. Although Iglesias has said that another left-wing alliance is on the table, it would be dependent on Catalan independence parties, thereby angering both the far-right parties and the conservative side of the PSOE.

Ciudadanos are likely also to be frustrated by the results. The party failed to overtake the PP and achieve its aim of becoming the main opposition. In third place, Ciudadanos is neither the government nor the opposition and risks being pushed out of the limelight. However, their vote-share increased by 2% and the party remains a stable force and potential coalition option. A coalition with the PSOE would be welcomed by many analysts as a balanced and strong government for Spain.

Many nationalist parties – Esquerra Republicana de Catalunya in particular – had success in the election. ERC is a left-wing Catalan party which has surpassed both the PSC (middle-left) and the Junts (right wing), their regional rivals. Increasing support for far-left separatists is a telling indication of the mood in Catalonia.

Vox has won 24 seats in Spain’s parliament, the first Spanish nationalist party to gain a foothold since the end of Franco’s rule and the return of democracy. The party rejects the ‘far-right’ label: its leader, Santiago Abascal, claims instead to lead a party of ‘extreme necessity’. Generally regarded as anti-Islam, anti-feminist, anti-immigration and homophobic, their aims include banning same-sex marriage, deporting any legal migrants who commit felonies and repealing the 2004 gender-violence act. Its slogan hacer España grande otra vez echoes Donald Trump’s mantra.

Perhaps the main driver of Vox’s electoral surge has been Catalonia’s independence movement and the resulting backlash in other regions of Spain.  Vox is fiercely critical of the movement, and suggests that leading socialists have sided with the enemigos de España. It is difficult to predict whether Vox will retain their support in future elections: their position reflects the public mood, and their defiance of Catalan independence does not guarantee their electoral success.

The May European elections brought similar results to those of the general election.  The PSOE representation increased from 13 to 22 seats.  The PP did slightly better than they had feared, suggesting that some Vox voters may have drifted back to the PP fold.  Ciudadanos, Unidas Podemos and Vox have also gained representation in the European Parliament, although Unidas Podemos won fewer seats than Podemos and Izquierda Unida did when running separately in 2014.

We now must wait to see with whom Pedro Sánchez chooses to form a government, or whether he decides to stick it out alone.  It is perhaps significant that Spain is one of only two EU countries not to have experienced coalition government in the last 40 years.  The left may have triumphed, but the right has seen success too.  In a multi-party system with multiple tiers of representation, there can be more than one winner.