Como agua para chocolate is more than food and magic. When the novel was first published in the early 1990s, it was an unexpected success.  It won over its intended audience in Mexico, and went on to conquer Latin America, the USA and then the world. Stephen Hart’s article on it in A Companion to Latin American Film (Woodbridge: Tamesis,  2004; pp. 171-78) describes how the Mexican cinemas (which had been dominated by Hollywood hits for decades) broke records with this home-grown film. A review of the early literary criticism and cultural journalism showed how the stereotypes that Esquivel used in her narrative played a double role: to create tension and simultaneously to connect with her readers and viewers. To a certain degree, you could argue that Laura Esquivel’s first major cultural project played it safe.

On the surface, food and its preparation are center stage in Como agua para chocolate. Mexican food is the one Mexican import that most easily crosses borders, whether they are concrete or just lines on maps. The story taps into ideas found in both vernacular and classic literature (think of Lorca): a mother who treats her daughter in a manner that is so unjust that the empathetic reader has no choice but to take her side. Esquivel taps into changing attitudes of women and men in our modern times, and we see her write soldaderas into her narrative and give us sensitive men who defy the stereotypes. To write about a story that is both modern and historic can prove challenging and it is from within this contradiction that my guide takes its point of departure.

As I read Como agua para chocolate, I saw so much that could be added in the field of literary criticism. It truly is a book for young literary students to learn how to apply close reading skills in order to unravel the nuances at work. Border politics permeate the narrative. Language is specifically used to delineate class and race (i.e. those delicate details that are obliterated in the English version – for those interested in Translation Studies). Questions relating to the study of gender are central focuses of the book. Careful readings bring these to light, and I considered that a critical guide could lead budding literature and film students to the topics that would help them to engage with these cultural documents in such a way as to provide them with tools to think about the books they read and the films they watch, and discover that the really important ones acquire depth and nuance when they are carefully inspected and interrogated. One example of this is the fact that this book can be read as the tale of the De la Garza’s exodus from Mexico. Consider this idea for a moment. Tita’s only living relative in Mexico by the end of the narrative (Gerturdis) was not from the De la Garza family, having been fathered by another man. Hope had literally left Mexico as the young Esperanza married the love of her life and followed him to Harvard. What does this tell us about elitism? How does it turn the celebration of mexicanidad on its head? 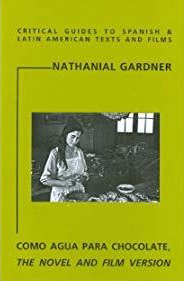 My critical guide offers answers as well as pointing to many other avenues of exploration. This most recent edition of the critical guide (the only one in the original Grant and Cutler series to have been translated into Spanish and distributed in Latin America and the only one to cover both a film and a novel in one guide) shows how the narrative continues to evolve and to be relevant to our times. On the one hand, it is because it offers a narrative that is easily consumed and digested, and on the other because Laura Esquivel continues to update her work. In this most recent edition of my guide, I delve into El diario de Tita which offers insight into the decades that pass between the final and penultimate chapters of Como agua para chocolate. In it, Esquivel attempts to redeem Tita in ways that engage with current trends. She allows Tita to escape the kitchen and gives her a profession: photography. It is no coincidence that this activity that offers her emancipation from her apron strings was shared by so many strong women in Mexico during that very time, such as Tina Modotti (whom Esquivel’s friend, Elena Poniatowska, saw as encapsulating the significance of female cultural creators during the period of Mexico’s history covered by Esquivel’s novel). These additions to the story make it ideal for students who wish to engage with a living narrative that allows us to reflect upon our times and those of yesteryear.

In many ways Como agua para chocolate offers a unique opportunity alongside other new additions to the Latin American literary and filmic canon. Hence, my desire to create a guide that facilitates critical thinking and engagement. My focus on ways to approach the written and the visual narratives can be used as a map with which to navigate the diverse topics they contain and as a critical template that could be applied to other films and narratives as well.

I hope you enjoy this critical guide, and I welcome your feedback. My hope is that this book will help you to uncover the different layers and questions that Como agua para chocolate contains.